«Being The Up And Down»
INTAKT RECORDS, INTAKT CD 365

«Everything Happens To Be»
BAG PRODUCTION RECORD

Why did I choose –

Jan Granlie:
On «Broken Shadows» we meet four leading musicians from the American jazz scene today. Alto saxophonist Tim Berne, tenor saxophonist Chris Speed, bassist Reid Anderson and drummer Dave King. In recent years, all four have distinguished themselves with a number of brilliant and exciting records. Berne and Speed have played together regularly since 1992, and Anderson and King were two-thirds of the band The Bad Plus, who have played together for more than 35 years.
This «all star» project is named after an Ornette Coleman composition and honors the legacy of the music of some of their idols and mentors. Ornette Coleman, Dewey Redman, Charlie Haden and Julius Hemphill.
Most of the songs are made by Ornette Coleman, but we also get two songs made by Julius Hemphill, «Body» and «Dogon AD», one is made by Charlie Haden, the beautiful «Song For Ché», which is one of the most beautiful compositions from Haden, and «Walls-Bridges» made by the, in my opinion, overly disapproved saxophonist Dewey Redman.
And they work hard with the opener, Ornette Coleman’s «Street Woman», a typical Ornette song, which can also be heard on Coleman’s album «Science Fiction» from 1971, in which Redman also participates. Here we get a great opening with the two saxophonists at the forefront of the typical and rhythmic theme, before they shine in different directions with brilliant collective improvisations. Then follows the slightly funky «Body» by Hemphill, which here, almost, is interpreted in an Ornette Coleman landscape. This was the last song on Hemphill’s album «Flat-Out Jump Suite» which came on Black Saint in 1980, which, more or less, was a tribute to Coleman. Here it is again very nice played, and we notice Anderson’s brilliant bass playing, before they are over in Ornettes «Toy Dance» from the album «New York is Now» from 1968. This is a brilliant tribute to Coleman, and you can almost hear the respect in Berne’s alto saxophone playing over an extremely driving comp, before we get «Ecars», also a Coleman composition from «Ornette on Tenor» from 1962. This starts with the theme of unison playing between the two saxophonists, and although Coleman’s distinctive way to write songs on rails through, it is a personal and nice tribute. This is followed by «Civilization Day», also from Coleman’s “Science Fiction” record. And we get it in a furious version where both saxophonists go completely in the «track» of «the master himself», before Anderson delivers a bass solo that smells scorched, before the song develops and we get a delicious improvisation sequence with the two saxophonists which can hardly be done better, until we are suddenly over in «Comme il Faut» from the brilliant Coleman album «Crisis». Here we get a bass solo that is right on top of Charlie Haden. This is something as rare as a ballad from Coleman, and the four do not play it so differently from the version on «Crisis», although I like King’s drumming better than young Denardo Coleman’s playing on the original. An excellent version! Then follows Julius Hemphill’s «Dogon A.D.», which is pretty funky and laid back. This was the title track on Hemphill’s record from 1972 on his own company Mbari Records, that later, in 1977, was released on Freedom. This is a good break from all the Coleman songs and brings in Hemphill’s fine and funky compositions, which are interpreted in an extremely delicious way. Then we get Coleman’s «C.O.D.», the opening track on Coleman’s record «Ornette at 12» on Impulse! from 1969. I’m not sure how old his son Denardo was when he appeared here, but he may not have been more than, let’s say, 12 years old. We are getting the song served in the Ornette way, where the two saxophonists do an excellent job. Here, King also escapes with a nice drum solo, before it all turns into a «four flat» accompaniment, where Anderson pulls himself on the bass and pulls the others into a wonderful sequence. Then follows Coleman’s «Una Muy Bonita» which came on single in 1960, and is a slightly different Coleman song. A little Latin in the estimate, but with brilliant tenor saxophone playing from Speed, before Berne takes over and gives a wonderful extension of the solo, before we get Charlie Haden’s «Song For Ché», which we have heard a number of versions of with many different constellations with Haden. But it is also on Coleman’s «Crisis» album from 1969 in a nice version. And the version we get here is close to the «Crisis» version, and Anderson’s two bass solos are like «cheated out of the nose» on Haden. This must be one of the most beautiful jazz compositions ever made!
Then the quartet moves towards the end of the session with Dewey Redman’s «Walls-Bridges». Redman played in a number of Coleman’s 60s constellations, and is a great composer, so that he is on this tribute is just right and reasonable. And here we get a version that is close to the Coleman landscape, before they end with the title track, the sore ballad «Broken Shadows» taken from the album «Ornette» which was recorded in 1971 and 1972. This must be one of the finest ballads Coleman wrote. A beautiful and melancholy theme that is played here by Speed during Berne’s freer improvisation at the top. And once again, it sounds like it’s Charlie Haden on bass. A beautiful version, which is almost tearful, so beautiful is it. «Broken Shadows» has become an almost heavenly great tribute to, primarily Ornette Coleman, but also to Julius Hemphill, Charlie Haden and Dewey Redman, made with great respect from four of the most exciting musicians on the American jazz scene right now. Highly recommended!

Henning Bolte:
‘Futari’ means ‘two persons’ and Beyond is the first recording of the duo of marimbist/vibraphonist Taiko Saiko (1976) from Berlin (she plays exclusively vibraphone here) and one of the elders, pianist Satoko Fujii (1958) now residing in Kobe after longer periods staying in the US and Europe. For me this album stood out in the immense stream of releases in recent months. Both musicians transform the sound possibilities of their instruments beyond the expectable and project their interplay into manifest metaphysical realms of imagination that they give shape and let bloom with extraordinary poetical temperament, inner calmness, (mutual) trust and self-evident certainty. It touches the breathing of the world behind the everyday noise and permeates it at the same time. Their music making unleashes dialectics of solid ground and higher force.
Touch of dawning light // bells resonating in lingering space // washes of sound and light // scurry along, vibrating // being there to be, surrender to confluence // lure calls arise // promising stability
That’s why …

Peter Slavid:
The story of «Deepening the River» follows the history of Glasgow after the dredging of the River Clyde, which allowed the arrival of bigger ships and trade with the world. The music takes us from Glasgow on a journey across continents: to India, New Orleans and the notorious slave-trading centre of Bunce Island in Sierra Leone.
The City of Glasgow commissioned this hour-long suite for an extended big band line-up from alto saxophonist Paul Towndrow. The band is packed with leading young Scottish musicians from jazz, folk, Indian and classical traditions. There are Scottish influences with fiddles and pipes, but the overall feel is of a powerful modern multicultural big band with some outstanding soloists.

Cim Meyer:
A kaleidoscopic, surreal dreamworld in sound from Tim Berne (as), Marc Ducret (g), Mat Mitchell (key), Oscar Noriega (cl / b-cl) and Chess Smith (d / glockenspiel / perc) recorded in 2019. At times compact, disturbing and demanding for the listener in the longer selections. But the edgy mix of earthly percussion and woodwind combined with lightning electricity is full of surprises and an exciting and addictive listening experience. An avantgarde album with energy and fascinating moods.

Paweł Brodowski:
Jazz fans sometimes argue, tongue-in-cheek, just who was the first jazz musician in the history of music. Some would insist it was Chopin, others would favor Bach. As proved many times before (Modern Jazz Quartet, the Jacques Loussier Trio, Swingle Singers – to mention the best known efforts), Bach’s driving flow and motives go well with jazz phrasing and timing.
The Andrzej Jagodziński Trio, which was formed in the early ’90s, is still going strong.
The group caught attention with its ingenious jazz interpretations of Chopin (Chopin, Chopin Once More, Sonata b-moll) and in fact sparked off a whole Chopin movement among jazz musicians in Poland. The Jagodziński Trio also had a take on Beethoven and now comes their exhilarating and revolutionary excursion into the land of Bach (polyphonic improvisation). They play with zest and sensitivity. The music sounds fresh. The Andrzej Jagodziński Trio are: the leader on piano, Adam Cegielski on acoustic bass and Czesław Bartkowski on drums.

Matthieu Jouan:
The whole process of the trio is based on this approach, not to fill the space for nothing; no intro, no coda, no exposition of the theme, no frills. In the heart of the matter, here and now. And when everything is said, one stops short. Epilogues are useless.

Patrik Sandberg:
Saxophonist Shabaka Hutchings is one of the leading musicians on London’s highly hybridized jazz scene. In various constellations Hutchings has both refined influences from the expressive sixties jazz and combined these with his Caribbean roots (reggae, soca). In the group The Comet Is Coming, he also includes elements from electronic dance and
club music.
Sons of Kemet has been around for seven years and have a major break with the album Your Queen is a Reptile , which was released on the long-established Impulse label 2018. Black To the Future follows a similar musical language. Like Hutching’s other projects, the framework
for Sons of Kemet is built on a number of genre influences, which are strongly integrated into its own cohesive unit where the history and the present unite successfully.

Anna Filipieva:
A very tight and mature album, recorded by St. Petersburg, Russia-based quartet led by the pianist Evgeny Ponomarev. Classically trained and a consummate jazz performer, he earned respect in St. Pete’s conservative, generally bebop-oriented jazz community, even if his original music (i.e., all 6 tracks on his sophomore album, his debut on Rainy Days) is anything but straight-ahead jazz. Compositionally tricky, rhythmically strong, and harmonically rich, this album was recorded by the band Evgeny worked at least 10 years with: sax man Andrey Polovko, bassist Grigory Voskoboynik, and drummer Peter Mikheev. The band is tight, the arrangements intriguing, but the overall effect is direct, and not as artsy-smartsy as it may seem: it is even rather accessible for the general public. 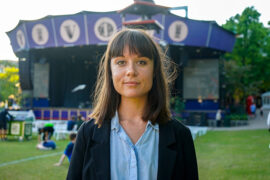 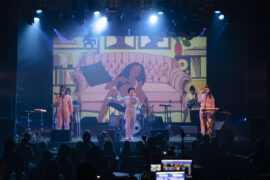 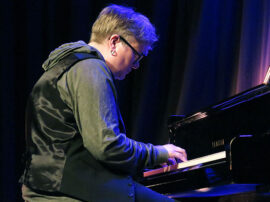 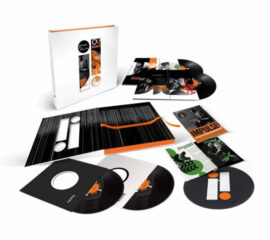 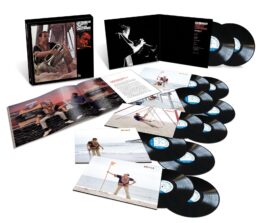 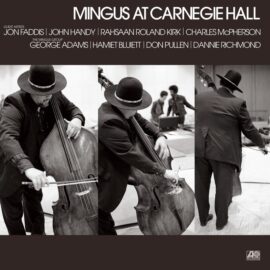 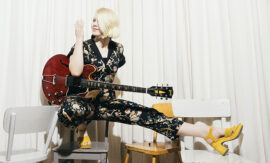 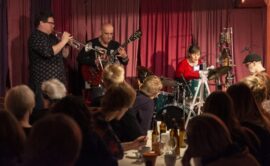 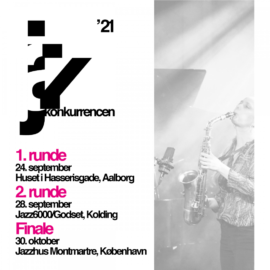 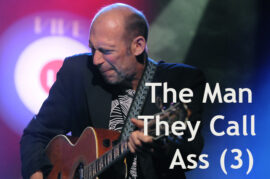